register for updates and specials from shokuiku 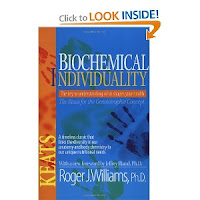 "It takes two to make a case of illness: he who gets sick and the bug that bites him" (Galen, the Greek physician)

This book "biochemical individuality" explains why some people are affected by different nutritional and environmental factors in a different degrees.
Why some people become alcoholics and diabetes?
why some people need certain vitamins or minerals more than others?
Even identical twin could be different in their needs for optimal functions.
There are so many debates about which one is the "right diet" High carbohydrate? or high fat and protein? how about vegetarian or vegan diet or low fat diet. No wonder we are so confused.
On the top of that there is a RDA for almost every vitamins and minerals for average person. So what is normal and average? Real persons have highly distinctive patterns of biochemical abilities, needs and responses.

Reading this book deepened my understanding on the importance of treating a person or patient for their individual needs. Unfortunately there is no answers to Your need though. You will need to experiment and listened to your body to know what is right for you and you only.
Posted by SHOKUIKU at 4:52 PM 1 comment:

I have a water filter that removes fluoride.
Fluoride is added to our water because it was believed to help with tooth decay. However a new study finds that contrary to what most people have been told, fluoride is actually bad for teeth.

Exposure to high levels of fluoride results in a condition known as fluorosis, in which tooth enamel becomes discolored. The condition can eventually lead to badly damaged teeth. The new study found that fluoride intake during a child's first few years of life is significantly associated with fluorosis, and warned against using fluoridated water in infant formula.

There are other known risks from having floride in your diet.
* Increases lead absorption
* Disrupts synthesis of collagen
* Hyperactivity and/or lethargy
* Muscle disorders
* Brain damage, and lowered IQ
* Arthritis
* Dementia
* Bone fractures
* Lowers thyroid function
* Bone cancer (osteosarcoma)
* Inactivates 62 enzymes
* Inhibits formation of antibodies
* Genetic damage and cell death
* Increases tumor and cancer rate
* Disrupts immune system
* Damages sperm and increases infertility
even though a filter that removes fluoride is harder to find and a bit more expensive I think it is worth it..
I just wish that the goverment will see the finding and change
Posted by SHOKUIKU at 1:26 PM No comments:

Personally this is quite an emotional time for me at the moment. One of the reasons is what has happened in Japan.
I don't know anyone who was affected greatly but there were a few relatives and friends whose houses were wrecked or decided to move away from where they lived for a while.
Seeing the devastating images and hearing the stories has been so hard. Even though I have been away from Japan for a long time it is my own country where lots of my loved ones live.
It is difficult to express how I really feel. my thought goes to all the people who were and are being affected and who are so generous with their time and effort.

There is some other thing going on in my life. To stabilise my emotional state there are things that I do
-exercise
I make sure I am active during the day
-sleep
going to bed early and sleep till I am ready to get up (which usually is quite early anyway)
-time to my self
For me having a quiet time to myself is very important. Usually in the morning before everyone gets up..
-aromatherapy
Bergamot, lavender,geranium, frankincense are my favourites
-beverage
herbal tea such as st worts, chamomile, echnacia
-diet
continue eating whole foods. include sweet vegetables and vegetable soups more such as pumpkin, cauliflower, carrots, onions, cabbages etc.
sour and bitter taste help with tired mind as well.
when people are under stress, some nutrients are not absorbed as efficiently or they need more of certain vitamins and minerals.
B vitamins are one of those nutrients. Whole grains and leafy green vegetables supply useful nutrients when you are under such stress. As well as vitamin C and E too as your emotional state comes down your immune system does too.
Posted by SHOKUIKU at 2:36 PM No comments:

youkan is a dessert made of agar agar and adzuki bean paste.
I have been wanting and trying to include more traditional japanese sweets. I suppose one of the reasons is because I would like to share these wonderful dessert with my daughter.
It is not so common in western diet to use much beans in a dessert dish but they are great nutritionally as well. Instead of all the high carbohydrate in many sweet dishes including ingredients like adzuki beans can help you stabilise your insulin levels.
other Japanese sweets that use beans are zenzai (sweet red bean or lentil soup with mochi or ponded kibi or millet), ohagi (pounded sweet rice with bean paste), daifuku (sweet dumpling) etc.
In the traditional recipe white sugar was used. It is easy to replace it with rice syrup or other more natural sweetners of your choice. I used rice syrup and raisin this time .
Posted by SHOKUIKU at 8:03 AM No comments:

I have always said macrobiotic is not really a diet but it is a lifestyle. there are people who do eat red meat occassionally and still say they practice macrobiotic. That is because they know how to balance some extreme products, following seasons and are able to listen to their body.
I want to talk today about including fish in the diet. I do have to admit Seafood has some great nutritional values. Many macrobiotic population has fish, mainly mild white fish. ( balancing out with more ying food such as potatoes, tomatoes and dessert etc.)

There is a concern about its sustainability and also a murcury in the seafood.
sustainability...
sea cage aquaculture---
fish escapes from the cases
dissolved and solid fish waste from sea cages pollute waterways
potential to transfer disease from caged fish to wild
sea cage fish are fed a diet that uses wild fish to make fishmeal
potential death or entanglement of seabird, dolphins, seals that are attracted to the sea cages
habital loss

If you do have fish on occasion, only choose the lowest mercury types such as shrimp, tilapia, haddock, scallops, squid, trout, hake and ocean perch. Never eat the high mercury content fish- swordfish, shark, tuna, snapper, lobster, grouper and sea bass. It is probably safest to avoid fish completely – healthy levels of omega-3 fats can be maintained by regularly consuming flaxseeds and walnuts and taking a clean, low-dose DHA supplement or a clean fish oil supplement.
select small fish in the lower food chain

Australian Marine Conservation society has released Australia's sustainable seafood guide. check out their website www.amcs.org.au
Posted by SHOKUIKU at 9:33 AM No comments:

Email ThisBlogThis!Share to TwitterShare to FacebookShare to Pinterest
Labels: macro info, my life and thoughts, nutrition

I was talking to someone last night about organic produce.
I am a huge fan of organic. I do believe strongly that they are healthier for your body and that is why lots of people started choosing organic produce. There are other reasons. you are supporting generally small farmers and produces, using less chemicals means less damage to our environment and it tastes better!

But there are some occasions you do not have the choice. There is a product that you can use to wash the veges and fruits but does it work? I suppose so. But vinegar and baking soda works as well. (and cheaper!)

You may check out the list below to see whats are the most contaminated and the least.

I think I have written about raw food before. (see under raw vegan food (nutrition)) Maybe because it is summer (autumn now I suppose) I have noticed I have been eating things raw more. As my interested grew and more research I did I started finding more reasons to include raw food in my diet.
However traditional macrobiotic diet did not include much uncooked food, except fermented products such as pickles. Ayurveda way of eating also discouraged too much raw food. it is believed that raw food can weaken one's centre, making digestion and assimilation weak, bring on anger and also has a danger of parasites and microbes.
So which is true?
MODERATION!
You don't have to be a completely raw all the time or cooking things all time, right?

Even my macrobiotic baked sweets are healthier than lots of others, still using processed flour( even wholemeal flour are processed) and oxidation of oil are a bit of concern. so maybe raw dessert using no dairy, refined sugar and fat I think are better option? a raw chocolate truffle for anyone?
Posted by SHOKUIKU at 6:23 AM No comments:

making school can be boring. Some kids just want the same thing all the time and some want variety. My daughter used to always want a sandwitch like everyone else and now she is warming up to the idea of having sushi. I was pretty happy about that as I am always trying to get her to eat wholegrains. I also made apple sauce muffins after school a day before. so it went into the lunch box as well.
The muffin was made with mixture of sprouted spelt, buckwheat flour and purple corn flour and ground flaxseed for omega3 boost.
at many schools these days naked foods are promoted. that means no food in a packed or disposable plastic bags. That will not only reduce rubbish it should reduce the amount of processed food that kids will consume. At my daughter's school they promote "healthy"eating. No chips, lollies etc. Even though there will always be some, who will snack on those "junk"food with empty calories, It is a great way to encourage each other and make the parents to be more aware.


Meanwhile this was my afternoon tea. homemade sourdough bread with fermented brown rice and millet and purple corn flour, topped with raw sprouted mung bean pate and activated nuts. Flaxseed oil for my omega3.
Posted by SHOKUIKU at 7:33 PM No comments:

Email ThisBlogThis!Share to TwitterShare to FacebookShare to Pinterest
Labels: family, kitchen creation, my life and thoughts 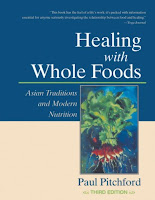 I don't know why I haven't mentioned about this book earlier. This book is one of the most useful, informative books I own.
If you are interested in your health, relationship with food and your mind, looking to improve your life in general this is a great book for you.
It is not one of "quick-fix" book. there is so much information in this book that I always find myself going back to it as a reference. Featured here are guidelines on nutrition basics including "green foods"; clear discussions on the Chinese healing arts; tips on making appropriate dietary transitions; sections on weight loss, women’s health, food combining, fasting, pregnancy, children, aging, and physical and emotional disorders; and detailed "regeneration diets" designed for cancer, AIDS, and other ailments. some recipes are great too.
Posted by SHOKUIKU at 1:24 PM No comments: