register for updates and specials from shokuiku

Such a beautiful morning!
even though it was freezing this morning the sun is out and shining, making me feel so happy. how funny just a simple pleasure like this can lift up your mood so much.
My daughter and I walked to school this morning. We usually ride our bicycle as it is quicker but it was nice to relax and walk together for a change. (She kept running to step on my shadow though) We spotted frost and condensation on spiderwebs on the way and breathed the warm air out from our mouths.
On the way back home someone stopped me and mentioned how my baby was growing quickly. He always saw us walking and riding in the area, watching my daughter grow from a tiny 1 year old baby to now a 7 and half year old. There are a few people like him here. We don't really know them but always say hello and they 'd sometimes mention how my daughter has grown.

When you have time to stop and look around there are so many precious experiences to be had. Slow down a little and appreciate what I have....
Posted by SHOKUIKU at 10:02 AM No comments:

how to cure olives 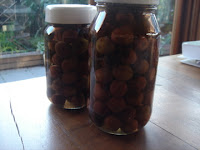 everywhere you walk in melbourne there are lots of olive trees with ripe fruits at the moment. most of the olives are wasted as people don't have time to or know how to cure them. Organic olives are quite expensive to buy and curing them yourself is not too hard. it just takes a while.

1. cuts to make two lengthways, down to the stone

2. soak the fruits with fresh water and change the water everyday. It depends on how ripe the fruits are. usually dark ones are quicker. taste to see they are not bitter.

4 fill the jar with brine, covering the olives.

5. pour some olive oil to completely cover the olives. 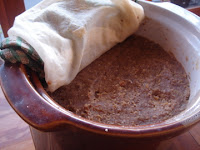 finally my home made miso was tasted.
even though it has been 10 month since I made the miso it still tasted quite young and sweet like shiro miso. it's not as smooth as miso that you get from a shop as I didn't make it as pasty it is still as good. If you leave it for longer it will become stronger in taste.
Posted by SHOKUIKU at 7:38 PM No comments:

Climate change is real. However there are so many people, including politicians who run our country and world, who remain unconvinced about the reality of climate change.

"last summer was so cold. maybe global warming is not happening."
Independent records show that the earth's average surface temperatures have risen over the last century. The oceans have absorbed so much of the additional heat, which impact its underwater ecosystems. The global warming is recognised by NASA and CSIRO.
Also short term weather events are very different from long term climate trend. And the trends are there are more extreme weather patterns and warmer temperatures.The trends must be taken on a whole over larger areas, not from small regions.


"Global temperatures are supposed to fluctuate"
The earth does naturally cool and warm, but each time it happened in the past there have been natural causes instead of us humans causing the effects. We pump about 30 billion tonnes of CO2 into the atmosphere every year. As well as other greenhouse gases, such as methane, which is 25 times more potent than carbon dioxide.

"it's too late to do anything about it"
We are experiencing already the effects of climate change. However we can avert or at least make it less severe.
Our response as individuals, communities and nations is critical. every bit will count!
Posted by SHOKUIKU at 7:54 AM No comments:

I don't know what has come over me. But today being stuck inside because of the rain and I decided to polish my dining table. I cannot remember the last time I did this....

So What do you use to polish your timber furniture?
To revitalize your any of the following methods will work. 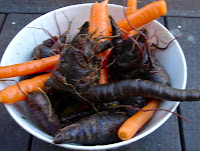 what are these funny purple creatures!?


I got these purple carrots from the market. When I saw them they seemed a bit tough and bitter but people at the market said they are in fact sweeter and have so much flavour. I was convinced and they were right!
I thought they are a bit like beetroot. My stew was pretty pink colour after cooking...


Another purple vegetable that I am obsessed with at the moment is purple sweet potato or kumara. I found them so moist and sweet. Steam or bake with a bit of seasoning and drizzle a bit of garlic infused extra virgin olive oil. They are my favourite!

carrots and sweet potatoes are high in carotene. they can be converted by the body into vitamin A which is important vitamin for good eyesight, fighting off infection, supporting reproduction, growth and the production of red blood cells and many proteins.
It is nice to nibble on raw carrots and they are indeed healthy, when it comes to these provitamin A carotenoids in vegetables and fruits cooking and eating some fats with them increase the absorption.
Posted by SHOKUIKU at 7:33 AM No comments:

Friend of mine has his new website up and running.
I didn't really know what exactly he did so it was so good to find out properly.
I kind of knew he had an amazing amount of knowledge but didn't know how much!

check his website out. and make sure you mention my name when you make an appointment! 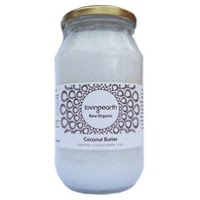 everyone is going crazy over coconut oil!

Coconut oil is rich in medium chain triglycerides, which are easily digested and converted into energy.


Coconut oil has about 50 percent lauric acid
The human body converts lauric acid into monolaurin which is claimed to help in dealing with viruses and bacteria causing diseases such as herpes, influenza, cytomegalovirus, and even HIV. It helps in fighting harmful bacteria such as listeria monocytogenes and heliobacter pylori, and harmful protozoa such as giardia lamblia. As a result of these various health benefits of coconut oil, though its exact mechanism of action was unknown, it has been extensively used in Ayurveda, the traditional Indian medicinal system. The Coconut Research Center has compiled various references on scientific research done on coconut oil.


there are several coconut oil on the market.
My favourite is loving earth
choose extra virgin cold pressed oil and they are fair traded by a good ethical company
Posted by SHOKUIKU at 7:56 AM No comments:

Email ThisBlogThis!Share to TwitterShare to FacebookShare to Pinterest
Labels: nutrition

I have a new website.
actually it is the same one as the last one but now I have my domain name. It should be faster to download as well.
It is
www.shokuikuaustralia.com
Posted by SHOKUIKU at 7:12 AM No comments: